Enigmatic, clandestine, El Indio Solari met in New York with a journalist from Orsai to give his last interview in print. This is the backstage of that historic chat, and a complete transcript of the interview with the legend of Argentine rock. He went to bed late last night and his hangover is apparent in his diluted energy.

I remember standing on a corner, looking to the side and seeing a year-old woman on roller skates. I looked forward and saw some body builder coming at me. I got to the hotel and the tennis player Guga Kuerten got out of one elevator, the actress Sonia Braga out of another.

It was even stronger when I started to discover the bars and their drinks.

El Indio walks slowly, moving his body carefully. The image of the colossal artist is relegated to pictures, those pictures where he looks like an Solarii god standing in front of thousands of adoring souls.

Since it will be a long chat, Solari, wearing an austere sweater and loose cotton pants, lets himself fall onto the bed. It is clear that his four decades on stage have taken a toll on his body, but it is also clear that his face has no wrinkles, a healthy color, and is governed by two eyes that sustain a tenacious gaze, like lightning.

His voice, while speaking, is very different from the stretched, metallic sound he emanates when he sings. On the contrary, his speaking voice is low and convincing, an instrument capable of converting everything he says into a maxim.

Most definitely, he will say in passing, he is a songwriter and he only promised to write songs. Part of the remarkable mystery surrounding El Indio Solari has to do with the scarcity of the interviews he has granted over his career.

Only My Songs Will Speak For Me Now: El Indio Solari

That is the way it was been for the past 25 years. He has never played a set on television, or allowed his concerts to be broadcast on the idiot box. The shows circulating on the Internet are videos, some of them taken clandestinely, that have filtered through the pores of our new technologies.

How to go about it? How could I interview the most mysterious, fascinating and popular musician in Argentina? How could I get to this J. I knew he had read the magazine because, among the very little reliable information circulating about his life, we knew he was well traveled, drank good wine, and had cosmopolitan and sophisticated tastes.

Later, I tried through the Sunday supplement of a newspaper. He turned that down as well. His intuition told him something in the spirit of Orsai might interest him. Not just the articles, that too, but something in its DNA: Orsai opened the door. I gave him several editions of the magazine and he and his manager both liked it. I would accept an interview if you have patience with my phobias. Besides the show in Tandil, I have several trips abroad planned, and these stimulate my peculiar discomforts.

Thank you for having me in mind. Then came several months of confessional emails that served to remind him he had a made a precious promise to me.

Finally, an unexpected email arrived from his manager: Would I be open to doing the interview abroad? Spurred mostly by my desire, I said yes.

Only My Songs Will Speak For Me Now: El Indio Solari

I had already worked out costs and fees with Casciari. May 7 the best email arrived:. You should be in the city and we will coordinate the day, entreevista and place by email. This is the strictest of secrets. Best, Julio Saez, Indio Solari. I had just arrived in New York when they gave me the coordinates. Early that gray Wednesday morning, I walked the streets of Manhattan to the hotel.

From a block away I could make out the figure of Matias, over six feet tall and with the undeniable look of an Argentine. El Indio is there. To my surprise, he came back otsai later saying: I had been courting El Indio for eight months. I had traveled 10, kilometers. I had arrived to the agreed upon place at the right time and yet El Indio, the legendary singer who had constructed the most powerful myth in Latin American rock, was still unapproachable.

And now — I thought to myself — what will happen?

A new order, like East Berlin in ? What else did I have to do to interview this guy? But at the door of the hotel was his manager, Julio: I got another tour of Manhattan.

We went up to the sixth floor. The legend — the austere barefoot man with the lethargic gait — opened the door and greeted me nicely. Indio performing in La Plata, It will always come on its own. I owe that to psychedelia. Mostly, in the beginning, when rock was trying to change the species and not society, the cultural of rock protected itself from those things. Then it turned into the official music of the system. It turned into music that was in fashion and stopped being that.

It showed its negative facets. People appeared in the rock experience without buttering all the bread they should have to to get there. When they are strong, experiences are lived in a serious way at the right moment. Twenty years later, when a different problematic crops up with different technology, it turns into something else. This also makes me think of the spirit of our youth. There is much more information about the future than I can talk about.

Anyway, I only promised to make songs. Without realizing it, the monster looks more and more like you. That demented design that thousands of people invent… one day you start to realize that your behavior is in accordance with that. One of the few other jobs I did was work in a home for children.

One can decide about his lifestyle and how that influences his work, to put it that way. Because the normal thing is to belong to a company that determines what is convenient for your career. I saw what happened with cooperations and artists in the Anglo-Saxon world. As Argentine rock star Charly Garcia once said: But when you are a guy who started with the privilege of having people listen to his music, you are the lion and you get used to defending your money.

My shows are on an international level. I have to sell more than 30, tickets to pay for just lights and sound. Did you always have that kind of antenna while looking at the world? I was always the alpha male in the pack. That has to do with personality, histrionics, that kind of thing. At some point it will be time for me to write.

Yoga ends up being the same as a cigar. I smoke cigarettes with no additives, which have their virtue, their pleasure. But when they come into fashion I get this kind of adolescent rebellion.

But they never provoked in me the necessity to get religion, or meet up with other people.

Besides, when one knows the material reasons that guide those dogmas, the mysticism loses much of its prestige. My brother listened to Luis Aguil… and Elvis Presley.

American rock and blues. The people you trust start to guide you. 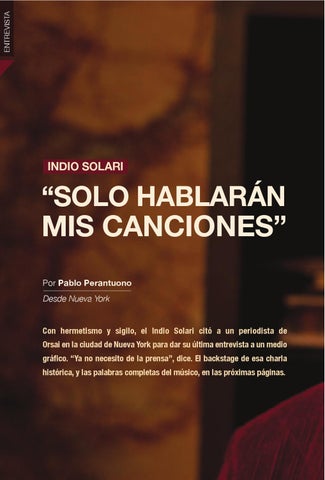 It was important for me. I lived intensely in and I spent that phase in La Plata.